The festival is a joint initiative of the United Nations Alliance of Civilizations (UNAOC) and the International Organisation for Migration (IOM) that invites youth to submit their creative videos addressing topics of migration, diversity, social inclusion and xenophobia.

Quinn was selected as one of the 27 winners from 320 entries and will now have his short film screened at a private awards ceremony on 9 November, held at the United Nations Headquarters in New York.

Quinn’s short film addresses the hardships of immigration through the clever use of sticky notes.  We had a chat to him to find out the story behind his winning film.

What is your inspiration behind the film?

Quinn Dacre: I wanted to do something different, through the medium of traditional animation. I was really inspired by the idea of each note being individually hand-drawn because the pain you go through makes it more worthwhile. I have always liked naïve art and the messy design styles of hand-drawn animations. At the same time, I wanted the film to feel authentic and human.

What is the film about?

QD: The film was made as a comment on the world events happening today. Acceptance is about the story of every displaced immigrant.

The main feature I wanted to focus on with this film is for it to be understood universally. Plural+ 2017 is a film festival with an emphasis on migration and fighting xenophobia with submissions from 67 countries. I wanted this film to have no barriers, just visualisation with an emotional impact.

QD: It felt great! It's always nice to know that there is someone out there who appreciates your work. It has only inspired me to keep producing more.

You can watch Quinn's film here. 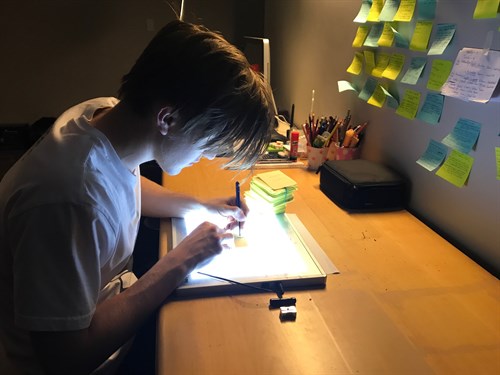